Sunday, October 24th.  Our St Louis stake conference was presided over by a general authority seventy in order to change our stake president.  Pres Bunderson has received a call to himself be a mission president.  He is such an inspirational and organized leader that he will surely succeed.  It has been good to be able to observe his service even if from a bit of a distance.  Near the end of the conference, I received an impression.  The Spirit confirmed to me that our service over these past two years has been an assignment from the Lord.  I have marvelled for months at the seemingly strange circumstances that brought us to St Louis in the first place, after so much expectation was built that we would serve in Thailand with people we love.  But medical delays, doubts, and nearly giving up but pleading once more allowed for our assignment to the Missouri St Louis Mission.  On reflection, no one could have anticipated the difficult but necessary work we would be a part of.  Indeed, during the pandemic, the missionary work was kept safe, reshaped, redistributed here until finally the nations of the world were ready once again to receive these trained, tutored, and cared for missionaries, reserved for redeployment to places in the world that needed to draw on the strength provided by this bulwark mission.  We were blessed to be able to contribute all our might, mind, and strength to this effort.

We ate our last supper in our apartment, and then went to the mission home where we had some teary goodbyes with the Bell family.  Then we received blessings under the hands of Pres Bell, a true servant of the Lord.

Monday, October 25th was our loading day.  Elders Sapp, Paulson, Williams, and Steed helped us load our car onto a trailer and pack the car and truck with what we wanted to bring home.  I am grateful for the help of these fine housing elders, doing unglamorous work and often on their own time, like today, but helping the work in ways they barely understand.  I will never discount the importance of temporal work done well.  Once packed, Sis Hatfield and I had the feeling that we needed to go minister one last time to Dee Marche and Annie Stewart.  So, we delayed our departure and went to see them.  We hugged, cried, and prayed together, leaving little care packages of food from our apartment.

Finally, we were off.  Our first destination was Pierce City, Missouri, near the Kansas and Arkansas southwest corner of Missouri.  There we carefully picked our way through rural roads to see the Leavitt cousins, daughters of Aunt Sue and Uncle Robert Hull, who have married Leavitt brothers and a cousin, and built homes and are raising families together.  In our world of small nuclear and rarely seen extended family, the Leavitts’ relatively simple, large family lifestyle is a remarkable contrast.  Sis Leavitt is a missionary in the MSLM, so we were happy to report on her well being.  We had a large, multifamily family home evening that dwarfed the primary and even the branch meetings we were accustomed to in the Pagedale branch in St Louis.  We were delighted to share some of our mission experiences and encourage missionary service to young and old.

Tuesday, October 26 we travelled across Kansas and eastern Colorado and had dinner with my sister Lori and her family.  I had wanted to stop and visit her on our way out to St Louis, but the timing just did not work well.  This time, we made it work, driving a long, hard day to make it to Denver in time to visit with AJ, Lori, and daughter Audrey.  They are a wonderful, active family.  Right now they are supporting Alex on his adventure of attending a soccer training school in Arizona.  He has been variously injured and homesick, but now is on track and learning a great deal academically, physically, and emotionally it seems.  At dinner, Lori raised her eyebrow when I mentioned the Denver hotel where we would be staying for the night.  So RaDene’s antenna were up when we drove there and saw a few too many signs of a scary neighborhood.  She called and cancelled our reservation and we drove out of town to find an alternative.  We stopped at a Motel 6 which had a neighborhood that seemed a little safer for our open truck loaded with our belongings.  The room was a little sketchy though.  I think we slept with our clothes on for an extra protective layer.

Wednesday, October 27th started with a frosty drive over the Colorado Rockies where we picked up a thick layer of salt and dirt on our truck, its contents, and our car in tow.  We stopped in a small town on the western slope to spray off at one layer of dirt.  We had decided to take a slightly alternate route up through Vernal rather than the traditional trip through Green River and Price.  The travel time difference wasn’t much and the change of scenery sounded appealing.  We had unknowingly missed a turn though, and about 40 minutes outside of Vernal we came to the end of the paved road.  We continued on a dirt mining road for about 10 miles over a mountain pass before connecting to the highway into Vernal.  The truck was certainly up to a dirt road, but hauling a trailer with a sedan in tow seemed a bit strange on an unpaved mountain road.

Once all was well that ended well, we had a good laugh about that.  As we drove through Dinosaur National Park, Vernal, Roosevelt, past Starvation Reservoir, and then Strawberry Reservoir, the brassy sun and dry landscape was a stark contrast to where we had been living the past two years.  But as we came through the Heber Valley with Mt Timpanogos in our view, we knew we were finally home.

As we pulled in front of our house, Spencer, Elisa, Abbi, Ezra, and Milley were waiting for us under a hand-colored welcome home banner.  Then I had a sweet reunion with my dear Mother, the person who may have paid the greatest personal cost for my being away this past year, dealing with the loss of Dad without much support from me.  Elisa took the kids home for bed, and Abbi remarked to Sis Hatfield that she did not want to see her wearing her missionary badge tomorrow.  Little Abbi recognized the time and distance of the mission service too, and was ready for it to be over.  Spencer and Mom stayed for Stake Pres Kevin King’s visit to our home to release us.  He generously gave us time to share and be counselled.  And then it was over.  He released us.  Two years of full time service came to a rather abrupt end.  Fortunately, we have family and good habits to help us reorient our lives.  We will never forget the lessons learned and service rendered this past two years in the Missouri St Louis Mission. 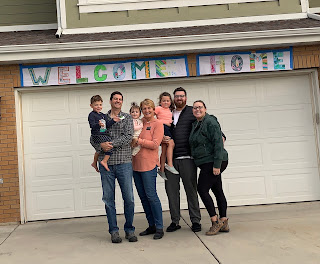 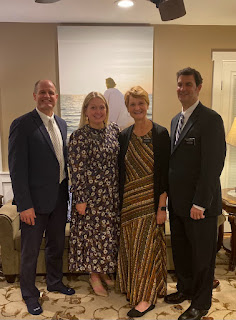