Irony of it all!

It's Sunday evening at 9pm.  And I am listening to the sounds of a plumber working an auger through the plumbing under the toilet in our bathroom.  For the 4th time in two weeks.  The irony of it all is I live with the Housing Coordinator for the Missouri St. Louis Mission.  The person in the mission who helps solve these types of problems for 90 plus apartments the church rents.  They rent 4 apartments in this complex alone.

Goes to show that crap happens no matter who you are or what good you're trying to do in the world! 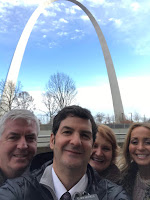 On a brighter note... we had our first visitors from home this week!  Taz and Tammy Murray from Provo came to see comedian Jim Gaffigan in St. Louis and introduce us to some of their dear friends who live here.  For the first time ever we slipped away from the office early on a work day and visited the Gateway Arch before their friends joined us for dinner and the show.  It was great fun! 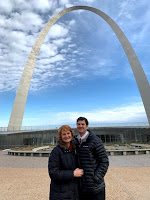 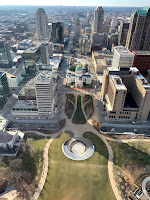 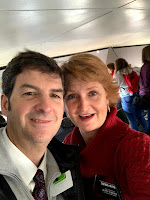 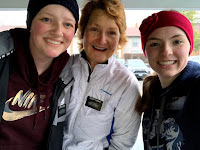 We love getting to know the missionaries as they come and go from the office or work with us on various mission projects.  I particularly love "owning my morning" with the Frontenac Sisters who live in our apartment complex.  These two sisters have earned a spot in my heart - Sister Thomas (who lends me her name tag when I forget mine) is from Utah Valley and Sister Jensen is from my home town of Hooper!  So fun!
We have been concerned about the impact the coronavirus is having on missionary work throughout the world.  Harlan's sister copied us on the letter sent to the parents of the missionaries in Thailand who have been quarantined. As we read the letter I had the very strong impression that it was yet another tactic the adversary has found to thwart the work. That fact was confirmed the next day when we had the chance to video chat with our friends Brent and Jackie Cook, who are also serving in Thailand (doing the same jobs in that mission that we are doing here in ours!)  Elder Cook told us that the work is exploding in south east Asia. He said throngs of people are converting to Christianity generally and to the Church of Jesus Christ specifically.  He wondered out loud how they were going to keep 180 missionaries engaged in the work holed up in their apartments.  It's a little thing but...

Within 12 hours of that conversation, I received a text from some of our Sister missionaries asking if I could help them find someone to help translate for a person they are teaching who's native language is Burmese.  I reached out to the Cooks.  Turns out that the Thailand mission extends into Myanmar - the country where they speak Burmese - and there are a few missionaries in their mission who do speak Burmese!    So with President Bell's permission - Sister Cook and I will be linking up missionaries in Thailand with Missionaries in Missouri to teach the gospel to someone here who speaks a language from over there!  Miracles!

Hooray!  The auger has stopped.  They are working on putting the toilet back in place.  Now it's 10:30pm and here come the 'First Responders" coming to wet vac and clean carpets, sterilize bathrooms, and start the fans going!  Think I'll call the housing coordinator and see if he can get us a rent rebate! (wink)