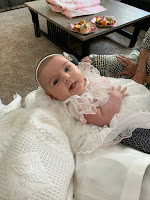 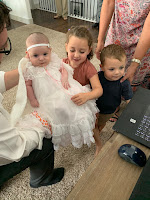 Sunday, August 16th was a beautiful day.  RaDene had suggested we start with a sacrament service, that Thayne Lyman, Elisa’s father and I conducted.  Spencer, a worthy, loving father himself, gave Amelia Rose Hatfield a wonderful baby blessing.  He was full of emotion and power. Sis Hatfield gave a beautiful, handmade, rose colored quilt to Elisa and the baby.  Having no knack for crafts, much less textiles, I really appreciate what a hand-pieced quilt represents.  Colors, fabrics, and patterns lovingly chosen, and hours of labor neatly sewing it together.  It makes me appreciate my Grandmother’s and Mother’s gifts of quilts to me. 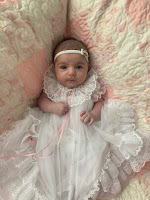 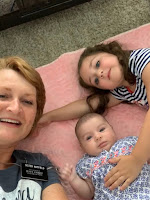 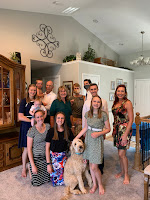 Then we shared some brunch that Elisa and her mom had put together.  We said goodbye to Amelia for the day and headed to Hooper to help welcome home Jason Sheets from the Texas San Antonio Mission at an open house in LaDawn and Darryl’s home.  LaDawn had helped stage things so families moved through without overcrowding.  Then we spend a lovely time at Kamie and Garff’s house catching up with them.  It was insightful to hear them talk about how hard it has been during these pandemic months to not feel busy and full of purpose.  Then we were off to visit with Momma Kay and Karl on the patio of their assisted living home.  Karl’s son Gary was also there.  Karl has had some rough times as his strength and health, and not least, hearing, continue to deteriorate.  Kay is full of vim and vigor.  See?  It was a beautiful day.
Tuesday the 18th was our “bonus” day, and we spent it in Spencer and Elisa’s home with their kids interacting with them in their home environment.  We could not get enough of swings and water play outside, and puzzles and books inside.  After dinner, we helped put the kids to bed and said our goodbyes, remembering how hard it was to say goodbye when we left eight months ago as we drove away.  We stopped by Terri’s house and said farewell to Mom, Dad, and Terri’s family.  It is painful to leave my parents again too.  Dad will be turning 90 in October!  But they are happy and blessed by their health, posterity, and faith.  Who could really ask for more for them? 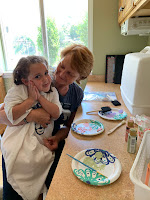 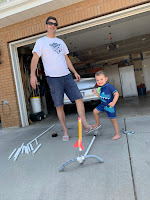 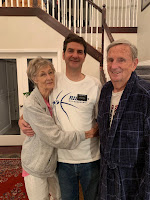 Wednesday the 19th we caught our flight back to St Louis and went straight to the office.  We would spend the next several days working hard to catch up and get ready for the biggest arrival in mission history set for next week.

On Thursday the 20th we wasted no time getting up to Jacksonville, Illinois, signing a lease for a second area in that town and delivering the furniture, even though no one would be there for six more days.  Will all the new missionary areas to set up in preparation for next week, it will take a lot of early preparation.  I also started making arrangements for hotels for five areas that have just been identified and can’t possibly have apartments before next week.  Going through the missionary department’s recommended chains is a mixed blessing.  Sometimes they can help, and sometimes they can’t, and it seems like finding out whether they can or can’t is much harder than it should be, with the wait adding to the stress.

On Friday the 21st we went to the office extra early, in part get a jump on the day’s work and in part to prepare for staff meeting.  Sis Hatfield and I are antsy because transfer areas and assignments are still not final, and we are days away from the biggest influx of missionaries in the history of the Missouri St Louis Mission.  It is hard to make preparations and secure housing when you are not sure where the missionaries will be assigned!  The President is working just as hard as us, trying to get information from stake presidents about where to expand the missionary force, meeting incoming missionaries by video conference, and working to discern the Spirit to finalize transfer areas and companionships.  Late that afternoon, Gareth and Ancsi drove into town, bringing my truck.  We have come to realize that we can’t both do our jobs and be in the same place all the time.  Too much of my work is in the field, and I can’t continue to leave RaDene stranded for long hours at a time.  So, we asked them to take a little road trip out here and we would fly them home.  But first, we had to share some of St Louis with them.  We picked up a picnic of ribs and took them to the arch, then drove across the Mississippi for ice cream so Anci could check one more state off of her list.

On Saturday, September 22nd, we divided to conquer.  RaDene went to the office, and I took Ancsi and Gareth to the Hazelwood North apartment where elders had been moved out and sisters were moving in next week at transfers.  The Evertons had taken the assignment to make sure it was ready to go.  They called me last evening while we were at the arch pretty much in a panic.  They thought the apartment was pretty much a disaster.  Knowing that the Evertons are hard workers, and that a little dirt doesn’t stop them, that was kind of a scary thought.  I called the elders who had left and told them that I had a report that the apartment was not in acceptable shape.  They promised they would do something about it, and I told them I would visit it tomorrow to check up on them.  Ancsi and Gareth would be my secret weapons.  We went with buckets and cleaners at the ready.  As it turned out, the elders made me very proud.  Although they hadn’t done enough by the time the Evertons got there, by Saturday when I arrived it was in really good shape.  Oh, sure, we did some more cleaning, and through a bunch of clutter and old refrigerated food away, but on the whole, the elders had repented and made it very livable.  I felt much better, not because my cleaning was cut short, but because the young men had heard me and taken their responsibility seriously.

With a bit of found time, I took Ancsi and Gareth to Walmart to do some housewares shopping for the apartment we were getting ready to open in Jacksonville, IL.  I’m getting pretty good at knowing just what aisles I need to cruise for missionary apartment outfitting.  And since Walmart stores are almost always laid out the same, I can get in and out pretty quickly anymore.  Sometimes I come out and it takes me a minute to remember what city I’m in.  I have been in scores of Walmart stores across two states, and it is sometimes a little disorienting.  Whatever else you can say about Walmart, I certainly appreciate the service they provide to the poor segment of our society.  Meanwhile, RaDene finished the Harvester newsletter back at the office.  The time it takes to format the pictures and captions for the departing and arriving missionaries, to say nothing of testimonies and staff articles, is daunting.  To do it for the largest transfer in history is epic.  No one really knows the effort Sis Hatfield makes.  But she did it, and we celebrated with dinner at Balducci’s, a whole-in-the-basement restaurant that looks like a Chicago speakeasy from the Prohibition era.  We found it searching for St Louis style “toasted” ravioli, something Ancsi and Gareth needed to experience.  It was actually about our 4th choice, having struck out three times with COVID restaurant closures. Were we ever pleasantly surprised.  Not only was the ambience a little exciting, but the raviolis were delicious.  And best yet, they also had St Louis style thin crust pizza that was so tasty!