Our first P-Day! A Field Trip

Finally, after almost 6 weeks in the mission we had time to take a Saturday PDay!  We were invited to join the Lisonbees and Ericksons, the two other office couples on what was for them a farewell trip to one of their favorite places in the mission on Saturday, January 11th.

The town of Sikeston, MO is a 2.5 hour drive south and is home to a place called the Lambert Café.  It is legend in the mission among senior couples.  It would take paragraphs to try to try to describe it.  The place is legend for its country cook’n, comfort food, and casual atmosphere, a collection of nostalgic memorabilia, and not least, the “throw’d rolls.”  They come hot out of the oven and the servers start tossing them around the dining room to outstretched hands.  Then comes tubs of apple butter and sorghum syrup.  I ordered delectable fried chicken and RaDene had some beef roast that was as tender and succulent as it comes.  The most impressive dish was Sister Erickson’s ham steak that was served in a 12 inch skillet.  The steak covered the bottom and was at least an inch thick.  This is to say nothing of the endless “pass alongs” of black eyed peas, fried okra, fried potatoes, macaroni and tomatoes, and more.  I’ve never taken more home in to go boxes.  It’s a good thing that Sikeston has the Lambert Café.  Otherwise, it looks pretty forlorn and in need of some fresh industry. 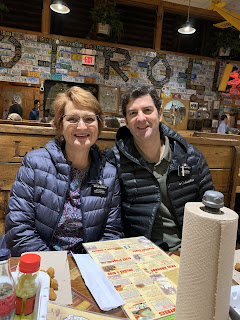 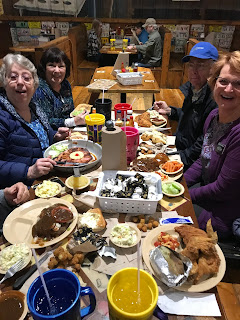 Check out this YouTube Video of Lambert's... we even got to hear their famous honky tonk piano artist play!


On the return trip to St Louis we stopped in the old city of Cape Girardeau.  Called a cape because of the rocky bluff in its center that looks out over the Mississippi.  It has a fascinating French and pioneer history.  Perhaps it is most famous now for the “Wall.”  This is a 20 foot high and almost mile long concrete wall that keeps the river out of the lower portions of town that otherwise would surely flood almost every spring.  We saw the huge gate that swings closed to cut off access from the river dock to the city when the river rises.  It has a beautiful mural painted a good deal of its length portraying Missouri’s impressive list of leading American patriots, authors, athletes, and artists, too many to start listing.  Google it, and you’ll be impressed too. 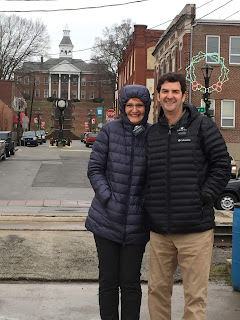