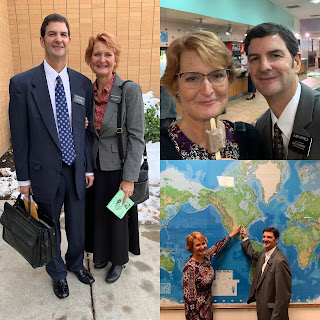 Finally, after years of driving by the MTC and being there when others, including all 3 of my children, were dropped off at the MTC, I (RaDene) finally was able to go there myself!  It was the first time I had ever been on the campus for longer than the time it took to drop a missionary off.  Which for my older two was about an hour.  With Mitchell, who went after the drop off at the curb process was instigated, about 5 minutes!

It was everything I thought it would be!  An inspirational ant hill of activity.  Devotionals, classes, a massive cafeteria, post office, copy center, books store. Though we were only there a short week there are several things that stood out:
Elder Hatfield has written elsewhere on this blog of our most impactful teaching/training experience at the MTC with Elder & Sister Gardner.  Suffice it to say here that ours was a powerful poignant example of how training missionaries to teach individuals by the spirit is so much more effective than role playing or memorizing points of doctrine.